Atherosclerosis is a health problem that develops progressively and, although it is a normal process with aging, it can start at infancy. Atherosclerosis appears when your arteries are obstructed by fatty deposits (also called plaques). Plaque can form anywhere in the organism, but it affects mainly large and medium size arteries (for example coronary arteries, arteries of the brain, and arteries in arms and legs). Plaque contains LDL cholesterol particles, immune cells (from inflammatory reactions) and other substances like calcium. Plaque formation causes reduction of artery elasticity and can lead to the artery obstruction. Blood circulation is then reduced or even blocked.

The majority of plaques are not “at risk”; they do not increase in size or do so, but slowly, and then stabilize. Some may reduce the coronary artery (heart artery) opening up to 70%, without causing any symptom and without complication. However, if plaque breaks, a blood clot can form and move into blood circulation, risking obstructing an artery of smaller size. This would lead to a blockage of the oxygen access to the cells, altering their function, and in some cases cause cellular death. In consequence, the interruption of blood supply can have major consequences if it occurs in vital organs such as the heart (see picture) and the brain, where it generates what are commonly called heart attacks, or strokes. 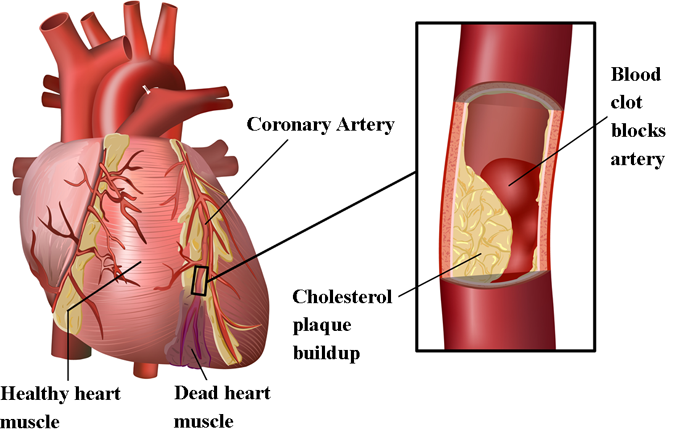 Illustration of adipose (fatty) plaque in a coronary artery

Heart attack, or myocardial infarction, is caused by a blocked coronary artery, which role is to supply oxygen to the heart. Most of the time, this blockage is caused by atherosclerosis, which is formed by an important fatty plaque in the vessel. This plaque, susceptible to break, could prevent blood circulation to the heart, limiting oxygen supply.

The oxygen supply interruption can damage the heart's capacity to pump blood to the rest of the body and can cause breathlessness. Patients can also feel a strong pain to the chest, the neck or the arm. In some cases, heart attacks can lead to death.

Nowadays, it has become evident that inflammation plays a key role in the development of atherosclerosis and increases the risk of heart attack. This is why inflammation is a key target in the treatment of cardiovascular diseases.

Researchers of the COLCOT trial are therefore interested in the possibility of acting on inflammation to slow down and/or stop the formation, progression and complications of plaques related to atherosclerosis.

A few numbers on the heart attack: