Even if many mechanisms of action are similar for these diseases, each one has its own specifications and requires particular attention. That is why each clinical study has a very precise goal. The results will help the scientific community and will allow researchers to progress in their quest to identify efficient and safe treatments.

The COLCOT clinical trial intended to evaluate the impact of colchicine, a well-known anti-inflammatory medication used for hundreds of years for several conditions, on the recurrence of cardiovascular events in patients who recently suffered a heart attack.

COLCOT was a worldwide phase 3 clinical trial initiated by the Montreal Heart Institute and funded by the Government of Quebec, the Canadian Institutes of Health Research, and philanthropic foundations. 4745 participants were randomly assigned either to the group receiving colchicine, or to the group receiving an identical product in appearance but that does not contain the active ingredient (placebo) on top of the standard of care. This has allowed us to evaluate whether it is preferable to use colchicine or not. In addition, neither the clinical research team, nor the participants, knew to which treatment they were assigned.

The primary objective of this study was to determine if long-term treatment with colchicine reduced the recurrence rates of cardiovascular events in patients who have recently been diagnosed with a heart attack (myocardial infarction (MI)).

Colchicine is a medication extracted from the Colchicum autumnale plant – the autumn crocus (see picture). It is a well-known medication already used by thousands of patients around the world to treat inflammatory diseases, such as gout and familial Mediterranean fever. Researchers made the hypothesis that the antioxidant and anti-inflammatory effects of colchicine may have a beneficial effect on atherosclerosis, by slowing down fatty plaque development and helping stabilize already existing plaques. COLCOT demonstrated that its antioxidant and anti-inflammatory effects reduced the recurrence of a second cardiovascular event in patients who have suffered a heart attack. 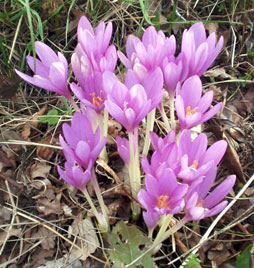 Main eligibility criteria of the COLCOT trial:
• Be 18 years of age, or older
• Have suffered a myocardial infarction in the past 30 days
• Not having undergone a coronary artery bypass graft (CABG) in the past 3 years
• Not suffering of an anti-inflammatory disease of the intestine (Crohn's disease or ulcerative colitis) or chronic diarrhea
• Not currently taking colchicine for another indication

General conduct of the study:
After the selection period, participants will be randomly assigned to one of the two groups of treatment, either colchicine or placebo.

During the entire conduct of the study, participants will take the study medication (colchicine or placebo) tablets, once per day. In addition, they will visit the study doctor twice per year, and will have 2 phone calls per year, in alternation.

For any additional information, refer to section Contact us